Fringe: Cut an 8″ length of yarn. Thread needle with loose ends of yarn. Come up at 1, leaving a loop on the wrong side of canvas. Bring loose ends and needle through loop (Fig. 6) and pull tightly. Trim ends to desired length. A dot of glue on back of fringe will help keep stitches in place. Turkey Loop: This stitch is composed of locked loops. Bring needle up through hole and back down through same hole, forming 100’p on top of canvas. Locking stitch is then made across thread directly above or to either side of loop as shown in Fig. 15 -Fig. 12 Diagonal Mosaic Stitch: This stitch is a variation of the Mosaic Stitch. It is worked in diagonal rows as shown in Fig. 7. Backstitch: This stitch is worked over completed stitches to outline or define (Fig. 2). It is sometimes worked over more than one thread. Backstitch may also be used to cover canvas Double Leviathan Stitch: This stitch is worked over four threads and is composed of eight stitches, all crossing at the center (Fig. 4). Pattern Stitch: Gobelin Stitches are repeated in a pattern to create a scalloped effect as shown in Fig. 8. Scotch Stitch: When worked, this stitch forms a square. It may be worked over three, four, or five horizontal threads by three, four, or five vertical threads. Fig. 9 shows it worked over four threads. Smyrna Cross Stitch: This stitch is worked over two threads as a decorative stitch. Each stitch is worked completely before going on to the next (Fig. 10). Tent Stitch: This stitch is worked in vertical or horizontal rows over one intersection as shown in Fig. 11. Follow Fig. 12 to work the Reversed Tent Stitch Two-tone Star Stitch: Work steps 1-12in first color as shown in Fig. 14. Work steps 13-16 in second color as shown in Fig. 15. Gingerbread Goodie House Cut along red lines shown in Fig. 16 to cut out one Arch Top and one Wreath from each 4″ dia plastic canvas circle.HOW TO MAKE A TASSEL Cut ten 5″ lengths and one 20″ length of embroidery floss. Fold 5″ lengths of floss in half. Make a small loop on one end of 20″ length of floss. Refer to Fig. 14 to wrap 20″ length of floss around folded 5″ lengths several times, covering almost all of the loop. Thread end of 20″ length through loop (Fig. 15). Pull other end of 20″ length until loop disappears under wrapped area (Fig. 16). Trim end at top close to wrapped area.HOW TO MAKE A POM-POM To make a pam-pam, cut two cardboard circles, each 2″ in diameter. Cut a center hole about 1/2″ in diameter in each circle. Thread needle with doubled 72″ length of yarn. Holding circles together, pass needle through center hole, over outside edge and through center again (Fig. 17) until entire circle is covered. You will need to use approximately 5 lengths of yarn to complete pam-pam. With very sharp scissors, cut yarn between the edges of the two cardboard circles (Fig. 18). Using a doubled 24″ length of yarn, slip yarn between cardboard circles, pull tightly and tie very firmly around center of pam-pam. Remove cardboard circles, cutting away if necessary. Fluff pom-pom by rolling between your hands. Trim pam-pam evenly. 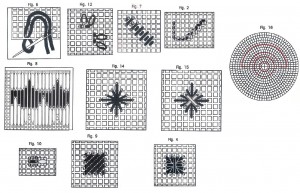 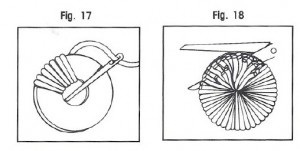