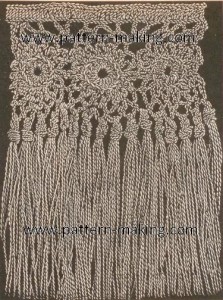 First make the medallions, joining them in a chain as long as desired.

In making 2d medallion, join 1 picot to 1 picot of 1st by chaining 2, 1 slip stitch through picot of 1st, and then chaining 2, in place of making an unbroken 5 ch. In joining all subsequent medallions, take care that the joined picots come opposite each other, with 7 between every 2 joins. When the chain of medallions is as long as required, finish the upper part of heading lengthwise, thus: Fasten thread and work from right to left, in every row.

1ST ROW: 1 sc over picot, 5 ch, 1 sc over next picot. Repeat until 6 picots have been made. Then ch 1, pass to the edge of next medallion and proceed as before.

4TH ROW: 1 dc in every stitch of 3d row. Turn the work and finish lower part of heading from opposite direction, fastening thread as before.

2D ROW: Make 5 picots on every medallion, ch 3, pass to next medallion, etc. The fringe is to be knotted into these 5 picots on each medallion and into the chain of 3 between every 2 medallions. For 1 tassel, take 6 strands of silk 6 inches long (or longer if desired), pass the bunch through and double it. Tie one small knot with the 2 ends, and one larger knot with the whole bunch. Clip the ends of the tassels even.